The pitfalls of going from pilot to scale, or why ecological validity matters The hip word in development research these days is scale. For many, the goal of experimenting has become to quickly learn what works and then scale up those things that do. It is so popular to talk about scaling up these days that some have started using upscale as a verb, which might seem a bit awkward to those who live in upscale neighbourhoods or own upscale boutiques.

We have very little evidence about whether estimated effect sizes from pilots can be observed at scale. When we have impact evaluation evidence from the pilot, we rarely bother to conduct another rigorous evaluation at scale. Evidence Action, a well-known proponent of randomised controlled trial-informed programming, frankly states, “…we do not measure impact at scale (and are unapologetic about it)”.

The reasons are easy to understand. We are eager to use what we learn from our experiments or pilots, to make a positive difference in developing countries as quickly as possible. And impact evaluations are expensive, so why spend the resources to measure a result that we have already demonstrated? Especially when it is so much more expensive and complicated to conduct an impact evaluation at scale.

We do not always see the same effects at scale

A few recent studies, however, suggest that we cannot necessarily expect the same results at scale that we measured for the pilot. Bold et al. (2013) use an impact evaluation to test at scale an education intervention in Kenya that was shown to work well in a pilot trial. They find, ‘Strong effects of short-term contracts produced in controlled experimental settings are lost in weak public institutions.’ Berge, et al.(2012) use an impact evaluation to test what they call a local implementation of a business training intervention in Tanzania and conclude, ‘the estimated effect of research-led interventions should be interpreted as an upper bound of what can be achieved when scaling up such interventions locally’. Vivalt (2015) analyses a large database of impact evaluation findings to address the question of how much we can generalise from them and reports, “I find that if policymakers were to use the simplest, naive predictor of a program’s effects, they would typically be off by 97%.”

There are a number of reasons to expect that the measured effects from our pilot studies are not directly predictive of the impacts at scale. Most observers focus on the concept of external validity. Aronson et al. (2007) define external validity as, ‘the extent to which the results of a study can be generalised to other situations and to other people’. Based on that definition, external validity should not be the main problem of generalising from a pilot to a scaled implementation of the same intervention in the same place.

The problem is ecological validity

What is measured is not predictive of what will happen when the intervention is scaled up and the playing field is leveled. I saw an example of this in a pilot intervention that delivered price information to a treatment group of farmers through cell phones, while ensuring that the control farmers did not have access to the same price information. The profits measured for the treatment farmers who had superior information cannot be expected when all the farmers in the market get the same information.

Unfortunately, if we cannot achieve the same results at scale, the findings from the pilot are of little use. Sure we can often collect performance evaluation data to observe outcomes at scale, but without the counterfactual analysis, we do not know what the net impact is at scale, which means we cannot conduct cost-effectiveness analysis. In allocating scarce resources across unlimited development needs, we need to be able to compare cost effectiveness of programmes as they will ultimately be implemented.

What can we do? My first recommendation is that we pay more attention to the behavioural theories and assumptions and to the economic theories and assumptions that we explicitly or implicitly make when designing our pilot interventions. If our intervention is a cool new nudge, what is the novelty effect likely to be? How does our small programme operate in the context of the larger market? And so on.

My third recommendation is that we pay more attention to the difference between pilot studies that test mechanisms and pilot studies that test programmes. Instead of expecting to go from pilot to scale, we should expect more often to go from pilot to better theory. Better theory can then inform the design of the full programme, and impact evaluation of the programme at scale can provide the evidence policymakers need for resource allocation.

(This blog post is adapted from a presentation I gave at the American Evaluation Association 2015 conference. Registered users can see the full panel session here.) 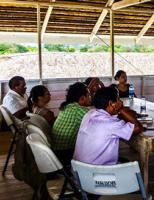 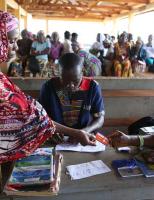 A classification of interventions and outcomes for international development evidence